Things Get Painted: Lessons Learned from Black and White Painting 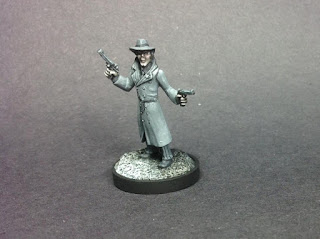 My most recent project wasn’t well thought out. At first it was meant to be a quick experiment with some skin tones and an attempt at a semi-noir look, and turned into a set of five models which I was really proud of. I also learned a lot about the process on the way.     The less colours you use, the easier this gets The first model I did, Stone, used a total of nine colours. This was initially not an attempt at strict black and white, but I intended to try to use a pale skin tone I had heard about on Reaper Live during their Kickstarter launch, and do the rest in grey tones. As the progress went on, I started reusing colours until I only had nine at the end. It narrowed the colour range, but after a comment from a friend at PAX helping with the four-colour challenge, I decided to aim for 4 colours on the next few models, namely Dragon Black, Dragon White, Tempest Grey, and a flesh tone. Stone, the most colourful of the group. It may not be noticeable here,
Post a Comment
Read more

Things Get Painted - Seishin, and some first impressions of Hexwraith Flame

Note: I started writing this post before the GW Contrast Paints were released, so this post doesn't directly compare the two. I understand that Hexwraith Flame was one of their prototype Contrast paints, however having used the two, there appears to be enough difference for me to warrant treating them differently to each other for the course of this post.    Even though I only recently finished the first models of my Leveticus crew, I've started a new Malifaux Crew! I'm enjoying getting some older metal models through the process quickly, as I'm not aiming for a display piece on older models, just a tabletop quality piece where I can try something new. This time round, I realised that Kirai's crew full of spirits would be a great chance to try out Hexwraith Flame. I have planned out the colour scheme in more detail, but am still in the process of writing that up. But with 5 Seishin staring at me, I figured it was a good chance to quickly get these started
Post a Comment
Read more 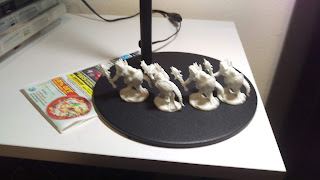 Everyone in the painting community has heard about Contrast Paints by now, so I'm not going to talk about what they are or how they work too much. Basically, they were released this weekend, and one of my friends ( Numbat ) picked up a few, and brought some along to our Sunday night painting for me to try. A few hours before he arrived, I realised that I would need a few models to try these out on, and went to my usual go to emergency miniatures: Reaper Bones. Look at them gathered there, slightly out of focus, judging me...   I'd heard that people were using standard sprays on the models as well as the new Wraithbone and Grey Seer undercoats, and that the pre-existing undercoats work fine. So I glued a few Lizardmen to bases, and did three versions of undercoat:  From left to right, Corax White, Mechanicus Standard Grey with Corax White sprayed from the stop, and then plain Mechanicus Standard Grey.    One thing to note here is that Mechanicus Standard Gr
Post a Comment
Read more 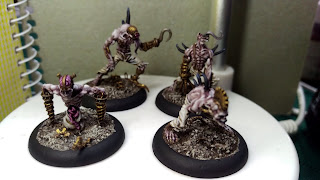 I recently finished up some M1E Steampunk Abominations in the hopes of getting to play Leveticus in M3E in a few months. I'm pretty happy with the outcome, however I was more excited to get to mess with the basing details. I'll cover the bases in a future post in more detail, but for now, enjoy the gallery! Abomination 1: Abomination 2: Abomination 3:   Abomination 4:
Post a Comment
Read more

Things Get Painted: Previously, on the hoard... 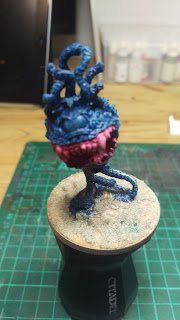 Despite my best efforts to keep this blog going, a few things happened around the middle of last year which simultaneously ate into my time and prevented me from painting in a manner I was happy with. This meant that while I did get some things painted, I never got around to blogging about them. I can hopefully find time in the coming weeks to go and post up some photos of older work, but at the moment that it more of a hope than a plan. I have, however, been able to get some things painted recently. So this post is going to focus on the recent Reaper Bones minis I've painted over the last few weeks. This happy fellow has been sitting half painted like this for the past 5 years or so. I've always hated the fact that I never painted it, as I always thought it was a cool looking model. A few weeks ago, I managed to clear off and reset my painting desk. This was the first model painted at it, mainly because I just thought that after all this time, I could just drybrush th
Post a Comment
Read more 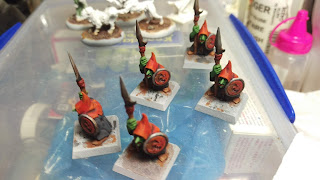 I've managed to get two old projects out of mothballs recently. The first is my old Orc and Goblin army. I enjoyed flicking through the Kings of War rules a few months ago, and decided adding some more troops to my army would be good (I have a lot left to paint still). I dug out a bag of goblin spearmen, and added a set of ten to a small unit. Then I gathered another ten, but was a bit more careful about how I selected them: These are the latest 5 Night Goblins brought up to the basing stage. They'll wait for another 5 to be finished, and then a few special additions, to all be based at once. You'll notice that the 5 Night Goblins here are all the same sculpt - this was a conscious decision, and I'll touch on that in a future blog.  I also dug out some half-finished Malifaux Oiran to paint up. Last time I was painting these I was waiting on shoulder surgery, and was not in a good place mentally. Both of these things are fixed now, and I was able to fin
Post a Comment
Read more

May 14, 2018
This is a quick post, but a fun one. After sitting down for painting night and not being able to paint the goblins I was working on, I tried an idea I've had in mind for a while. I have a bunch of bones minis from kickstarters, capsule machines, and just buying them. But some of them I have an idea for, then lose the thought. Others I think are OK, but I'll not get a chance to do the big grand thing I want. Others were part of a bundle, and I feel I want to work on something other than that. What do you do with the extras? Well, statues are pretty quick... The model above is about an hour of work. Glued onto two mdf bases, I sprayed it black and painted the model bronze. After some washes, dry brushing, and attempted verdigris, I painted the stone plinth, added some static grass, and called it done. It's not the most exciting paint job. It's pretty rushed, and I'm not overly happy with most of it. But it's some terrain. And now that I have done this, I
Post a Comment
Read more
More posts

Turelio
Sydney, NSW, Australia
I'm Nick. I paint models, play video games, listen to music, read books, and generally sit in front of a computer for as long as possible each day.